There's little doubt about it, the current run of unseasonally warm weather is having a huge impact on our wildlife. The lack of cold weather has seen dozens of plant species in flower that shouldn't be out yet, a lack of birds in gardens as supplementary food supplies aren't needed and a general lack of the usual winter bird species we all expect to see. A visit to Axmouth in Devon yesterday produced just a single Mediterranean Gull among the mix of gulls on the river as well as a black redstart near the yacht club but little else of note. It has been very quiet indeed.

That said I finally got a chance to take a look for the long-staying Dusky Warbler at Ham Wall this morning and couldn't wait to get out there. I picked up Dave Helliar and we arrived on site at 10am to learn that it hadn't been seen (or heard) since around 08:30....Hmmm, starting to smell like a dip already!

We stood there for three hours looking at this: 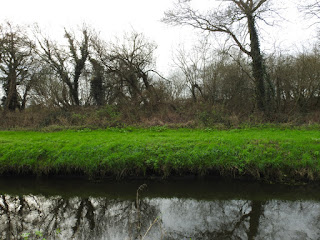 Hoping to see one of these:

But instead only saw a few of these... 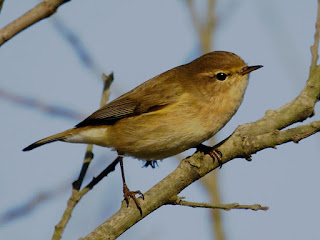 The last half hour helped alleviate the frustration when the Glossy Ibis put in an appearance and a couple of Great White Egrets flew across the reeds in the distance. As Dave pointed out, 20 years ago we would have been more than happy to see either one of those. Although great to see they are almost expected today, particularly the GWE's. How times have changed. A male Marsh Harrier also put in an appearance.

A little more surprising was this Perez's Frog Pelophylax perezi still showing well on the ponds by the car park.

What was slightly gutting was the Tweet Dave read out on the way home 'Dusky Warbler again at Ham Wall at 13:15'...a full 12 minutes after we'd given up and left. Ah well, where would be without the ups and downs of birding, it's all part of the reason we do it. Maybe next time...

Great discovery by Dave Helliar yesterday at Chard Res. It showed briefly at the North West end of the reservoir with Little Egrets before relocating to the south. Present again this morning before being flushed by the reserve warden and not seen since.

Somerset is easily the best place in the country to see these magnificent birds but it's still a very scarce bird in South Somerset and always good to see this locally.
Posted by rharris at 20:42 No comments:


Things have definitely quietened down locally but a quick jaunt to Budleigh Salterton on business today allowed me the opportunity to make a brief stop at Seaton and Axmouth on the return journey home. Although pretty quiet it was the first cold, sunny day we've had in a while and I was rewarded with a Sandwich Tern close in to shore feeding in the bay and a nice adult winter Med Gull among the Black Headed Gulls on the river.

plus a few of the regulars...