I may not be getting much birding done at the moment but the recent run of milder weather has allowed me to get the bat detector out most evenings. The result has been to really get to know which species occur in the garden here at Whitestaunton, including our two largest species - Noctule and Serotine.

We have 16 species of bats regularly occurring in the UK and luckily Somerset is home to all of them. Most people are familiar with the Common Pipistrelle Pipistrellus pipistrellus as it's frequently seen flitting around buildings and gardens and is, as its name suggests, very common. There are a number of other species that are probably seen and overlooked though including the mostly water-loving Daubenton's bat Myotis daubentonii, one of our native Myotis family members. Whilst bats of the Myotis family can be notoriously difficult to tell apart Daubenton's foraging behaviour along with it's echo location calls, help distinguish it from other members of the family.

Daubenton's can often be seen flying low over open bodies of water where they trawl for insects close to the surface using their feet and tail membrane. I was surprised to see such good numbers last night at Chard Reservoir - at least 25 of them in a feeding group close to shore and probably many more around the perimeter of the water. I shot the short video below on my phone just to illustrate part of the feeding group. The sound you hear is my bat detector going crazy and you may be better off watching this on YouTube to see the video enlarged.


Not easy to see but look closely...

And a sound clip of them at their feeding peek:

The Soprano Pipistrelle was particularly vocal:

To graze or not to graze...

For years now 'conservation grazing' has become increasingly popular as a way of managing heathland as well as native grassland areas for wildlife. Both ponies and cattle are frequently used as well as other grazers such as goats and sheep , the aim being to replicate more traditional farming methods whilst controlling scrub encroachment onto more open areas. Each species has its own advantages and disadvantages and in general for the two most popular livestock these are:


Cattle
● cattle do not graze selectively, which is good for creating diverse flower-rich swards; they can also push through scrub and eat taller, coarser vegetation and cut/dead vegetation
● they don’t graze too close to the ground and are therefore less likely to create bare patches than horses
● they leave areas of more tussocky vegetation, which are beneficial to invertebrates and small mammals
● not so good at coping with sites on steep slopes
● need more forage per animal and therefore might not be appropriate for very small sites

Horses and ponies
● horses can graze very close to the ground and so can leave bare patches of ground
● they are selective grazers and will leave some areas untouched, resulting in stands of taller vegetation
● they will eat tall grass, grass stems, and dead/cut vegetation
● they tend to defecate in specific areas (latrine areas) which causes a build-up of nutrient
● need more forage per animal and, as for cattle, might cause small sites to become overgrazed

When grazing is being considered as a form of management, risk assessments are often carried out - particularly in highly sensitive habitats. Strict recommendations are usually advised, including a max livestock density of .02 livestock units per ha (this varies depending on the livestock species being used) and indeed no grazing is recommended if the site in question is under 5 ha. How you impose these guidelines though is a bit of a mystery. The assumption is that animals will spread out evenly over a site but in reality they will often stick together or avoid areas where the feeding isn't as good thereby putting more pressure on other parts of the site. So is this form of land management actually helping preserve our vulnerable habitats? Relatively new research has shown that even grazing at the suggested livestock densities is having a detrimental effect on reptile populations and I believe wildlife generally. In parts of Europe studies have shown that reptiles have actually been extirpated from some sites since the introduction of grazing. The effects of mass trampling, over-eating in selected areas (forming an early successional habitat rather than the desired mid-successional) are taking their toll.

Evidence of these negative effects can be seen at a number of locations across our region too which, I have long believed, have contributed not only to a decline in reptile species but also in breeding birds such as the Tree Pipit, Meadow Pipit, Stonechat and Nightjar. Something which should be of concern to anyone interested in wildlife. Only last year I visited a know site for Smooth Snakes Coronella austriaca and Sand Lizards Lacerta agilis in Dorset to find cattle actually trampling the areas and refuges occupied by the reptiles.

So should the practice of conservation grazing still be happening or is it case of over use of the wrong livestock species? Well, that's going to be a matter of conjecture but maybe the risks out-weigh the benefits? A study by ﻿Christopher J. Reading & Gabriela M. Jofré, published in The British Herpetological Society's 'The Herpetologist Journal' (Volume 26, Number 2 2016) shows conclusively that there were considerably higher numbers of reptiles found on surveys in areas of lowland heath that had not been grazed compared to areas which were grazed. The only exception to this finding was the Sand Lizard Lacerta agilis, which didn't appear to be effected by grazing (although they didn't benefit either). But it does make you question what we are trying to preserve, should we be conserving one species over all of the others?

Certainly there are sites on the Blackdown Hills close to me which have been heavily grazed by cattle in the name of conservation and the resulting habitat looks pretty poor to me. An opinion perhaps validated by the fact that this year there appears to be no evidence of breeding tree pipits or nightjars present for the first time in many years, not to mention a lack of reptile species!

But to balance the argument and end on a positive note I have seen what appears to be some excellent land management locally too. Trinity Hill near Axminster is an isolated patch of heathland and a local nature reserve, long know for it's specialised heathland species. Over the last couple of years the site has been well maintained and grazed by ponies. 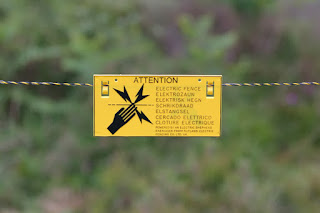 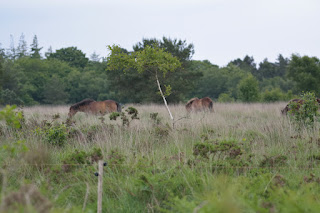 There is a low density of ponies on site which are periodically moved across the heath and this appears to be making a very nice habitat for birds, insects and reptiles. There are no signs of over grazing here. So maybe it can be got right if those in charge know what they are really doing?

It will be interesting to see how Trinity develops as a habitat over the coming years and whether there will be an increase in breeding birds and reptile numbers there, I certainly hope so. I also hope that the recent research isn't applicable to this site, I guess only time will be the judge of that.

FOOTNOTE:  this story just came to light today. Talk about well timed!
Posted by rharris at 10:36 No comments:

In search of orchids...

My brother has long been interested in botany and at the weekend he went to search the chalk downlands of western Dorset to see if there was any sign of the Musk Orchids that once grew in that region. Both Duncan and I saw Musks there over 30 years ago and although the habitat appears superficially unchanged there was still no sign of them, such a shame. It could be the sheep that regularly graze the site, the off-road motor bikes that churn up the slopes occasionally or maybe something effecting the micro habitat that we just can't see but it seems unlikely they will appear again any time soon.  By way of consolation though he did see some other beautiful species including a few Bee Orchids - enough to brighten the dullest of days and my thanks to Duncan for sharing a few photos.

This is the second instalment of Dave Helliar's regular round up of local wildlife from the past couple of weeks. To kick things off a trip to the wonderful Quantock Hills in Somerset and some very nice summer migrants. Pity all of these have vanished (or are very scarce) from the Blackdown Hills...just can't work out why the Blackdowns have become so unattractive to so many species?

And from Devon (also disappeared from it's haunts on the Blackdown Hills...)

From closer to home on Dave's regular patch near Chard:

That last few weeks has seen a flurry of good local birds, butterflies and other wildlife and Dave Helliar has been catching up with a few of them. Spring migrants and a few scarcer species too...including this lovely red-footed falcon at Morden Bog in Dorset.

An unexpected visitor was this unusual wagtail. The restricted white throat isn't pronounced enough for a full blown Iberiae nor all yellow (as would be expected in Blue-headed) and instead indicates a possible hybrid between the two?


With the warmth comes more wildlife too: