Kent is undoubtedly one of the best places in the UK for wild flowers and in particular has a large number of orchid species - some incredibly rare.

My brother and I have been planning to make the trip to see some of the specialities for over 30 years but we never seemed to get around to it, until this year. But last Saturday we made the trip to the farthest reaches of 'The Garden of England' to see two new orchid species for us - Late Spider Orchid and Lady Orchid. We ended up seeing 13 species over the course of the day.

The beginning of June is the perfect time to visit. Most orchids are at their peak and you stand a good chance of seeing a few late and early species too. We started at Folkestone for the Late Spider Orchid and soon found (with the help of some great directions) a small colony in a fenced-off area about 30 ft x 10 ft in size.  In the UK Late Spider Orchid is confined to Kent's short-turfed calcareous downs and only a few locations at that. It's quite shocking to look at this small enclosure, guarded by an electric fence to stop grazing cattle and realise that this is one of the better sites for it. It's a beautiful plant.

It's a beautiful location overlooking Folkestone and the sea and we also picked up a few Man Orchids here, a species we've not see for a very long time. There were good numbers of Adonis Blue and Small Blue on the wing. I managed to get a photo of the former on my phone.


After admiring the Late Spiders we moved on to our next location to see the Kent Monkey Orchids. Monkey Orchids are only known from two sites, Hartslock near Henley-on-Thames and Park Gate Down, which is owned by the Kent Wildlife Trust.

We quickly located the orchids, which are easy to find scattered across the reserve. What struck us the most is how much more robust they are compared to the Chiltern plants. They also flower a month later and are a richer pink colour.

Seeing the Monkey Orchids was a real surprise as we weren't sure they would be out but I'm so glad we stopped to take a look, they are beautiful.

It was still only about 9:30 and we were on to our next stop, just 6 miles up the road. We arrived at Yockletts Bank and within minutes found our next target species for the day, Lady Orchid. The southeast is the stronghold of these magnificent orchids, one we have both waited a long time to see. Some specimens are knee height and almost look a little out of place growing among the trees.


Our last call of the day was Noar Hill in Hampshire to try and locate Musk and Frog Orchid.  Despite a thorough search, we didn't see either though. We ended up seeing 13 species of orchid, which is a pretty good tally for a day out in the UK:

Canopy Camp and the journey home...

It's our last full day in Panama and we intend to make the most of the beautiful Canopy Camp and its wildlife.  After a lie-in we are having breakfast at 7 am and listening to the sound of Howler Monkeys in the hills nearby and it's magnificent!

The hummingbird feeders and feeding stations are busy and there seemed to be life everywhere. A pair of Palm Tanagers nest in the hanging baskets by the lounge area, Chestnut-headed Oropendolas grace the fruit table and brightly coloured Thick-billed Euphonias chase each other around the bushes. Before long we've added Bananaquit, Whooping Mot-mot, Orange-chinned Parakeet, Red-lored Parrot, White-necked Jacobin, White-vented Plumeleteer, Saphire-throated Hummingbird, Yellow-throated Toucan, Streaked Flycatch and Rusty-margined Flycatcher.

After breakfast we went to check out a Rufous Nightjar nesting just 30 meters from the breakfast area. This gorgeous bird had two chicks that were nearly fledged.

Another 300 m further on and we were listening to the incredible rattling/snapping sound of male Golden-collard Manakins as they danced to attract a female. These stunning little birds suddenly kick-off into a frenzy of action and bounce from sapling to sapling in an area just a few meters squared. Absolutely mesmerising.


After watching these amazing little birds for nearly an hour, it starts to rain and we decide it's a good opportunity to have lunch and head back to the Camp.Over lunch the rain sets in (with the obligatory thunder/lightening) putting paid to any further plans to continue filming that afternoon.

Eventually it eased a little and with it came some activity in the shape of a small troupe of Geoffroy's Tamarin, a scarce primate confined to Panama and Colombia. They gave amazing views before vanishing into the dense jungle once more.


We have to leave by 9 am the next morning so after a fantastic evening meal (the food and hospitality at Canopy Camp are second to none) we go through the process of checking and packing all the camera gear and getting an early night.

Next morning we load the van, bid goodbye to our wonderful hosts and start the journey back to Tocumen International Airport. On the way back we stop again at the cafe visited on the way to the Camp on day 2. Hummingbirds buzz around the feeders by the dozen.


An amazing way to finish the trip.

Today is our last chance to capture the returning adult Harpy and as everyone else sets off into the pre-dawn darkness of the Darién jungle, I remain behind once more. Although the mango leaf foot-bath treatment has had a dramatic effect and I can now stand and walk slowly around, it's still too gruelling a journey to take and would no doubt set me back again.

I fly the drone little more and wander to the edge of the village where I pick up Gray-breasted Martins, Black Vulture, Tropical Knatcatcher, Crimson-backed Tanager, Chestnut-crested Oropendola and Collard Aricari.

As I'm watching the Tanager I see Marco, one of the village porters who have been helping to carry all the gear to the site each day. He gives me a thumbs up and I soon discover that the adult male returned to the nest with food. You'll have to watch Wild Central America when it comes out to see this as it happened. It's great news and I'm delighted for the rest of the team - it was a long time coming and their persistence paid off.

I also found this incredible Treefrog Trachycephalus typhonius, sometimes known as the Pepper Treefrog. It was enormous, around 12 cm long and when handled oozed a sticky, slimy secretion from all over its body, which can cause extreme irritation if it comes into contact with the eyes or mucus membranes. 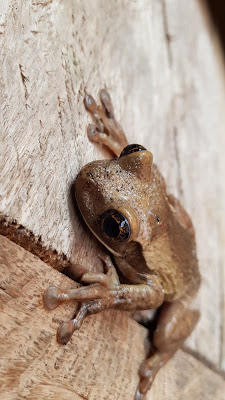 I saw loads of great butterflies too but very few identified yet.

That evening we pack up all the gear, load the 4 x 4s and make our way back to the river for the return boat journey to Yaviza. We are tired, hot, sweaty and really looking forward to spending our last full day in the luxury of the Canopy Camp.


Tomorrow we would be filming around the camp and making the most of its incredible wildlife viewing opportunities.
Posted by rharris at 21:38 No comments:

It's 4 am again and we are up and preparing to head off into the jungle once more.  The adult must return today, it's been at least three days since it last fed the chick. I'm still in a heap of pain with my feet and decide to head off ahead of the team to get a head start. As I head out of the village I'm hobbling badly and I can soon tell that the 1 hour 20 min walk is going to take an awful lot longer. Thankfully the flooding from the previous evening has receded but it takes me 20 minutes to go just a few hundred meters. Nigel, Mike and the team soon catch me up and I have to make the frustrating decision to return to the village. There will be no adult Harpy for me today... or indeed tomorrow.

I decide to make use of the time and try to get a few aerial shots with the drone before giving in and putting my feet up. They're a real mess and I can barely walk on them, I wish I'd never seen those wellies! The people in Pijibasal are fantastic though. They appear from time to time to check on me, supply me with cream to put on the blisters and bring me meals and drinks to my bed - unbelievably kind and generous!

I can't even get up to walk around the village birding but I do see Buff-breasted Wren, Blue-headed Parrot, Blue-gray Tanager and Red-crowned Woodpecker from my confines.


On both days the Harpy adult doesn't appear and everyone is getting a little worried for the chick. There's talk of how they'll proceed if neither adult appears in the next day or two, it may have to be rescued and taken into care in Panama City. Not a prospect anyone wants to think too much about.

The delay in getting the shots has also messed with our scheduled filming itinerary. We shouldn't still be here but instead heading towards the Canopy Tower near Panama City. However, we can't leave without trying one more time. Tomorrow is the last chance.