I'm still getting quite a few Siskins in the garden at the moment, including several juvenile birds but star of today was this lovely male hanging out near the pond this morning.

Bats are staring to pick up too. The warmer evenings have started to produce more reliable numbers of the commoner species including Pipistrelle, Soprano Pipistrelle, a single Noctule and a flyover Daubenton's - a new species for the garden in Whitestaunton.

Roll on the warmer weather. Can't wait to get more Noctules and the Serotines back in the garden too.
Posted by rharris at 19:39 No comments:

The warmer weather is certainly bringing out our reptilian friends a bit more. Saw this beautiful and rather large female Grass Snake Natirx natrix helvetica at the weekend. She's just about ready to slough her skin - the dull colouration and milky eye indicate an imminent shed approaching. During this time she won't move too far as they also become more susceptible to predation.

And this one from a few weeks back that I'd forgotten about - regenerating a lost tail: 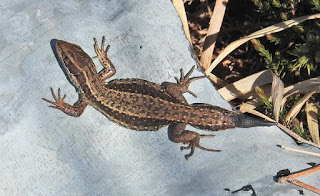 And another casualty who obviously had a close shave not too long ago...it's Latin name is so apt.

Nanquidno:
Devon/Cornwall border:
Willow Tits are of course Nationally scarce these days so seeing them is hard enough but getting photos with a bridge camera is something else!

Thanks to Dave for sharing his photographs
Posted by rharris at 20:24 No comments:

A couple of weeks back Dave Helliar had a week in Cornwall and caught up with the long-staying mega Hudsonian Whimbrel along with some other nice birds and summer migrants. Thanks to Dave for sharing his photos:

I got quite excited about seeing a male Bullfinch in the garden, partly because they are one of my favourite birds, partly because they are really scarce visitors in Whitestaunton and partly because the few others I've seen have all been females or juvenile birds. This one was sitting on the patio and appeared to be pecking something off the stonework. A few photos later and I soon realised that it didn't look right, something was obviously exuding around its mouth and Trichomonosis came to mind. It's a condition that's been around since 2006 and I have seen it in Greenfinches and Chaffinches before. The cause is a parasite Trichomonas gallinae which causes feeding difficulty and eventually starvation occurs. There's lots of info out there on the web including this page from the BTO website. Shame to see such a beautiful bird with this terrible condition.

To help prevent it from spreading you have to regularly clean and sterilise your bird feeders and surfaces where food is placed as well as any drinking/bathing source - something we do religiously here and will do again now. I went outside to get a closer look and although it appeared quite bright, I managed to walk within just a few feet of it before it even realised I was standing there.

After missing the Great Spotted Cuckoo on Beer Head a couple of years back the news that a 1st summer bird had been found on Portland at the end of last week came as a great relief...now all I had to do was get there. Being Saturday morning I had to do the usual drama school run with my son but come midday I was picking Dave Helliar up (who was heading back for seconds) and setting off on the 40 mile drive to Portland Bill.

After a surprisingly stress-free journey through the weekend traffic that blights the coastal routes throughout the southwest at this time of year, we arrived to find a good sized crowd assembled and watching the cuckoo, which had taken up residence in a hedge some 35 meters away. It looked in good health and was feeding well on the thousands of brown-tail moth caterpillars that were covering the ground as well as the surrounding hedges. Dave obtained some great photos the previous day but my best results came courtesy of some video grabs.


Apologies for the ropey video - the heat haze was terrible and the camera hand-held on top of my scope, not the best recipe for filming.
Posted by rharris at 21:15 No comments:

The common (barred) Grass Snake, found throughout the UK. I found this stunning specimen up on the Blackdown Hills today enjoying the sun like the rest of us. This completes all the native UK reptiles for me this year and after such a poor year in 2015 it's quite a contrast to have seen them all so early in the season.

The small size and light build, fairly narrow head and longer tail (you'll have to take my word for that) all indicate that this is a male and judging by the bright, clean colouration it has probably sloughed its skin recently too - just immaculate!

Hopefully get to see a few non-native reptiles now before the season ends.