I've had a long-term interest in our native bats and this week I took a step nearer to learning more about them with the acquisition of a bat detector. I'd been thinking about it for ages and always been put off a bit by the price and confusing amount of information out there on the web but I finally found one I liked the look of and I have to say, I haven't been disappointed yet!

I went for an Echo Meter Touch by Wildlife Acoustics, a really neat little device not much bigger than a match box that plugs into the newer iPads and iPhones and, together with their App, can record and identify species live in the field (currently 25 European species as well as those for North America and the Neotropics). I'm sure it's not going to be 100% accurate all of the time but provided you get a clear recording of a bat on the move (rather than just emerging from its roost where the calls are different), it does have a very good success rate at identifying the species in question. I've also downloaded BatExplorer, a free piece of echo location ID software where I can import and double check the .wav files for species accuracy. Needless to say if you don't have an iPad or iPhone it would be prudent to look at other options as buying either one to use with this kit will rocket the price considerably.

So far I've recorded the following species from my garden at Whitestaunton:

It's surprising how quickly you get to recognise the calls coming through the speaker of the detector. The 'clip clop' sound of a passing Common noctule is not unlike a horse trotting up the road and pipistrelles are also distinctive. Five out of eighteen isn't a bad start and I have a feeling I'm going to be logging a lot of bat calls in lots of different habitats next year. Below is a recording of a Serotine made a few nights ago in the garden - it's only brief and I recommend turning the volume up a bit:

I've only just started really getting into wasps. Like most people I usually find myself swatting them away from food and drink when eating alfresco and until recently I never gave them the time of day they deserve. Of the 10 or so species in the Vespinae family, I've only seen (and been stung by) two (as far as I know). Vespula germanica is one of our commonest species and the only one I've made the effort to identify before. The fallen fruit in the garden is now attracting quite a few and I'm hoping for something different soon. But until then, I'll make do with these. The abdominal pattern is quite distinctive and the face pattern clinches it. They really are striking when you look at them closely.

Also of interest in the garden today was this Southern Aeshna Aeshna cyanea:

And a few distinctive flies (thanks for the ID's Dave):

A great place for wildlife but a bit of a zoo at the weekends. Natural England have marketed this part of the Somerset Levels to death. Fortunately it's a little quieter during the week and the prospect of seeing a Bluethroat (very rare in Somerset) was enough to lure Dave Helliar out to take a look. The Bluethroat never materialised unfortunately but the spectacle of no less than TEN Great White Egrets must have been a sight to behold! Even rarer than that Dave photographed a large female adder, (first this year!) basking on the side of the track and not taking a blind bit of notice of the passing birders.


Closer to home were two Common Lizards Zootoca vivipara, a Wheatear near Chard and a Little Stint at Black Hole Marsh, Seaton along with a couple of Wood Sandpipers.

The morning was looking slow...Dave Helliar and I had both considered heading down to Exminster Marsh for a juvenile White-winged Black Tern that's been showing well there. Early news on Twitter looked good but then news went quiet. Exminster Marsh isn't normally a difficult journey by any means but the thought of getting caught up in Saturday holiday traffic heading to and fro Devon and Cornwall was too much to bear and with the lack of news the plan was shelved.

Jump forward a couple of hours and I received a call from Dave on my mobile. The mobile reception in Whitestaunton is appalling and no sooner had I answered the call than I decided to call him back on the landline as I could barely make out what he was saying to me. He picked up the phone: 'There's a probable Baird's at Black Hole Marsh'! Within minutes we were on our way to take a look for ourselves. When we arrived there was still a degree of uncertainty as to whether it was a Baird's or a White-rumped Sandpiper but before long it had flapped it's wings to reveal a dark-centred rump with white sides. It was close too, probably no more than 25 ft away and giving great views, even if the sun was behind it most of the time. A little corker.

Couple of nice pics in from Andy Grinter too:

As always, videos were recorded in 1080p, but YouTube typically defaults to 360p. Once the video is running, you can click on the configuration settings icon and select the higher 720p to 1080p options for better quality.

A nice find by local birder Phill Abbott. Let's hope this is the start of a great autumn.
Posted by rharris at 21:56 No comments:

Wood Mouse in the Wood House...

My father-in-law went to top-up the bird feeders yesterday and discovered this lovely little Wood Mouse Apodemus sylvaticus in the bottom of a stainless steel dustbin in the garden shed! The bin, which had a lid securely in place, houses the mixed bird seed supply. No idea how it managed to get in there or how long it had been there but it was happily munching away on the seed mix. This is one of our commonest murids and only likely to be confused with the similar Yellow-necked Mouse Apodemus flavicollis, which usually has (as it's name suggests), a yellowish/buff band across the chest/throat area which is lacking in Wood Mouse. In this case distribution helps a little too as flavicollis is found a little further east of here. 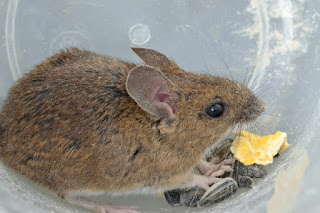 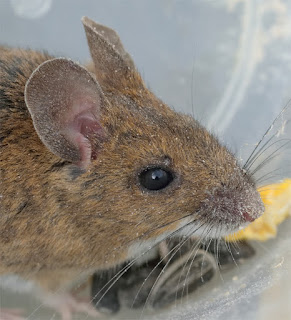 Another visitor to the shed was this Tree Wasp Dolichovespula sylvestris (kindly ID'd by someone on Twitter).

Thanks again to Dave Helliar for his weekly round-up of birds and insects from the local Chard area. Oystercatcher on his local patch is always a scarce bird and a good find together with some butterflies and other insects that are battling through the currently unseasonally cool weather. Wader movement has been slow but steady with several Common and Green Sandpipers and a single Black-tailed Godwit moving through the area too.

I had the opportunity to revisit Ham Wall briefly on Friday and couldn't resist the chance to spend what little time I had available with the Perez's frogs at the back of the car park. They are real characters and despite seeing more jump into the water than sat on the banks of the ponds themselves, one or two were quite approachable allowing me the opportunity to film them. They were in fine voice too.


As always, videos were recorded in 1080p, Once the video is running, you can click on the configuration settings icon and select the higher 720p to 1080p options if you're Broadband connection is good.
Posted by rharris at 20:19 No comments: