Well, this had to be the surprise of the autumn for me. Just a few hundred metres from my house and staying for two weeks, one of the Isle-of-Wight release programme White-tailed Eagles was present until a few weeks ago.

Asked not to put the news out by the Roy Dennis Wildlife Foundation (who run the release scheme), we couldn't unfortunately share the news. Now that it has moved on though I can at least share a few photos. An amazing bird to see, they are the proverbial 'flying barn door' and watching it glide over Whitestaunton being harrassed by Ravens on a near daily basis, was a sight I never thought I would see and almost certainly never will again.

It's not G463's first foray into this part of the southwest peninsula, having started a tour of Dorset, Devon and Cornwall in October, at which time it passed close to Axminster. However it didn't stay anywhere for very long until it reached South Somerset on its return from Cornwall. Two weeks in one spot showed a marked change in its behaviour and was the main reason the foundation didn't want its location made public.

As you would expect, it was continually harassed in flight by both gulls and covids but it didn't seem to care too much and when perched it would often sit quietly with corvids in the same tree.

The photo was taken around 60 m away with the P1000. It crossed the A30 backwards and forwards dozens of times and often perched within full view of the road but remained unnoticed. It was at times though, very difficult to locate. Despite moving around a relatively small area it was not an easy bird to monitor and report back on.

Not a bird I ever thought would be added to the garden list. Glad it's on the move though, hopefully more people will connect with it as it heads home in the coming weeks.

Whilst lockdown for Covid-19 is over in the UK, things still feel far from normal. Travel restrictions are making filming overseas difficult, although there's light at the end of the tunnel. Running the moth trap two or three times a week from home has been a lifesaver during this time.
Persistence paid off last week when I found a Bedstraw Hawkmoth in the trap, a new species for me.

Other species from the last few weeks include: 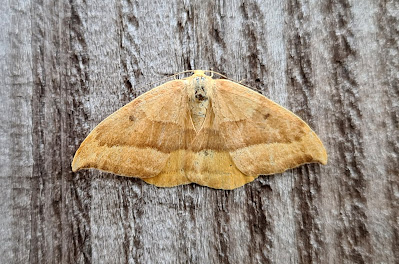 Email ThisBlogThis!Share to TwitterShare to FacebookShare to Pinterest
Labels: Moths

2020 has been exceptional for many reasons, Covid-19 has disrupted lives around the planet, in the UK we have experienced the warmest, driest May on record and (now that we can travel locally) I've seen more Bee Orchids, Ophrys apifera, than ever before.
The conditions this spring seem to have been ideal for many orchid species - ironic considering we haven't been able to travel to see them for the first time ever! However, now that lockdown has eased slightly, my son and I have returned to doing his preferred walk in Seaton and it was on one of these walks a couple of weeks ago that I noticed a large colony of Bee Orchids in pristine condition. The Ophrys family are probably my favourite of the British orchids, they are very distinct, attractive plants and the Bee is certainly one of the most exotic looking.
I went back again to make a short video with Nigel.
Posted by rharris at 09:43 No comments:

Starlings are a great group of birds. Generally either loved (for their cheeky character, quirky manners and colourful plumage  or ignored (pests, noisy, too common), I'm certainly in the former group. An adult European Starling in breeding plumage is one of our most attractive birds IMO.
In recent days we've seen an influx of scarce Rosy Starlings from Eastern Europe and Asia, they've been popping up in flocks of regular starlings up and down the country. Yesterday a pair were found in Seaton, Devon about 12 miles away from here. When I heard the news I turned and looked out of the window to see a small group of half-a-dozen starlings foraging in the field behind our house. My heart jumped as a pale bird moved randomly among them - bloody hell! Could it be a Rosy Starling here too?  I frantically ran for my camera and bins and after a few tense seconds realised that it was in fact a leucistic European Starling! An individual that was completely snow white (but with a dark iris, so not albino). My short-lived disappointment (at it not being a Rosy) was soon replaced with awe as this stunning little bird weaved in and out of the tussocks and crept ever closer. Later in the day it appeared on the wires outside the house and I was able to get decent images of it. 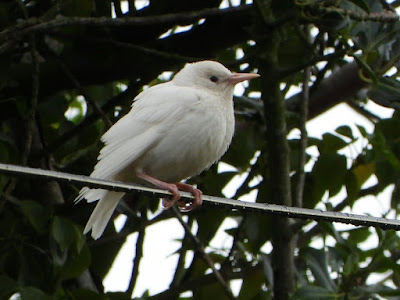 Fast forward to Sunday (today). After hearing the news that the Rosy Starlings were 'showing well' at Seaton again this morning, I had to go and see them. They are stunning birds and being so close to home, it would have been amiss not to pay a visit. Nigel couldn't resist going for this one either and joined me there.
On arrival a few birders were wandering around, scanning the rooftops and it was apparent the birds were not showing. An older couple told me they had been there 45 minutes and not seen it. As I said 'that's a shame' I glanced up at a chimney pot and said, there it is! 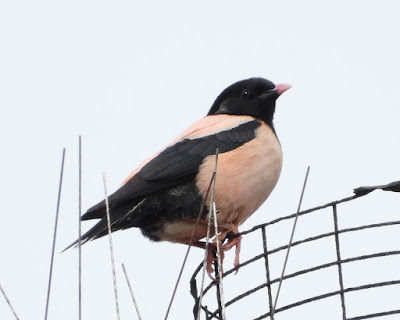 The female never materialised but the male made up for it in showiness, what a fantastic bird and my best views for sure.
A stroll along the under cliff afterwards produced in excess of 20 spikes of Bee Orchid, the perfect way to round-off a great morning. 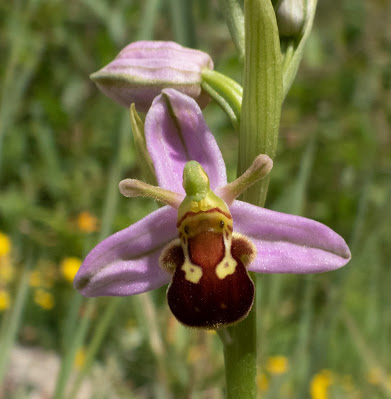 Fingers crossed that lockdown will cease (or at least be relaxed) soon so that we can travel further and get more active.
Posted by rharris at 22:35 No comments:

Email ThisBlogThis!Share to TwitterShare to FacebookShare to Pinterest
Labels: Birds

Coming to a screen near you soon....

The programmes we filmed last year in Central America are coming to our screens in the next couple of months - perfect viewing whilst on lockdown!  Already available on National Geographic Wild, the two-part presenterless version 'Wild Central America' aired in the UK on Sunday 8th March and can be seen again on NatGeoWild (Sky CH 166) on 27th April at 9am and 10 am


The hosted versions (Wild Costa Rica, Wild Guatemala, Wild Panama and Wild Honduras) are due to be shown over the coming weeks and months and will feature on other channels (Eden, Animal Planet). A short teaser for 'Wild Costa Rica with Nigel Marven' can be see on Nigel's Twitter feed https://twitter.com/Nigelmarven/status/1250497219444248577

Stay safe!
Posted by rharris at 06:37 No comments:

Our trip to Panama was coming to an end and we planned to spend the last few days filming  in and around Panama City itself. Panama City is a striking place, it has a stunning skyline that overlooks the Pacific Ocean and a Metropolitan Park just 2 km from the city core that is home to many wild animals.


The park was our first port of call. It's home to 284 species of trees, 254 species of birds, 45 mammal, 36 reptile and 14 amphibian species. A one hour steady climb uphill along a good path brought us to a view point with fantastic views of the city. Joining us were a nice male Summer Tanager, Lineated Woodpecker, a Double-toothed Kite (sitting at head height just feet away) and a family of Geoffroy's Tamarin. 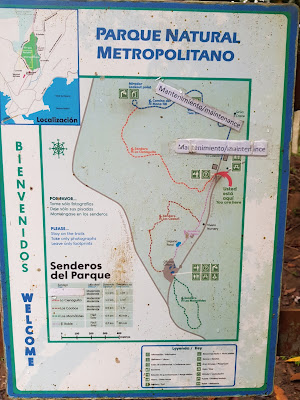 Our main reason for coming here was to see a very special bird though. Rosy Thrush-Tanager is nearly always difficult to see and Metropolitan Park is one of the best places to catch up with them if you're lucky.  We were fortunate to see a pair but the male was much more elusive.


He sat further back and only gave brief but stunning views.

Rosy Thrush-Tanager is in its own monotypic genus with no particularly close relatives. Surprisingly perhaps its nearest species on a molecular level, are the Calcariidea (buntings including the more familiar Lapland Bunting and Snow Bunting). The pair also share the song, when one finishes its phrase the other takes over and it's really challenging to tell where one ends and the other begins. For me they are one of the highlights of the trip.

Back in the city there are dozens of kettling Turkey Vultures using the thermals from the skyscrapers to their advantage. A 10 minute drive later and we are overlooking Panama Bay, one of the most important migrating wader spots in Central America. Thousands of birds can be seen here at certain times of the year and as the tide comes in we get good views of Marbled Godwit, Willet, Greater Yellowlegs, Semi-palmated Sandpiper, Least Sandpiper, Sandwich (Cabot's) Tern and a beautiful Tri-coloured Heron.


This was the one and only place we saw horrendous rubbish problems, more to do with the tides washing into this bay rather than people specifically dumping here. They appear to be fighting a loosing battle but could certainly do with more help cleaning it up as it's very much out of control...

That was it!  Filming over we spent the last few hours relaxing and packing at the hotel before heading to the airport for an evening flight back to London via Madrid.

Wild Costa Rica, Wild Guatemala and Wild Panama will be out on a variety of channels later this year. Hopefully I'll be filming again soon.