It's a lengthy drive from the dry forests of the Heloderma Reserve to the cloud forests of Ranchitos del Quetzal and we arrive late in the evening. With the increase in altitude comes a much cooler and damper climate but the cloud forests of Ranchitos are brimming with wildlife. Our reptile guide Andres Novales, is tasked with finding us some reptiles to film so he heads off to look for some while we all hit the sack so that we are ready to film the next morning. 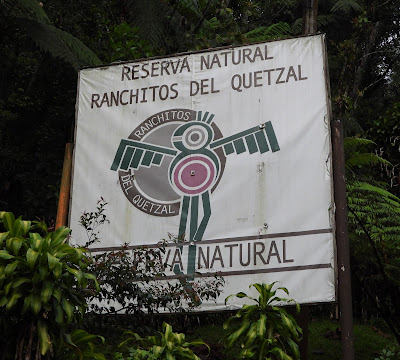 We gather for breakfast and the news couldn't be better, Andres had found us a couple of magnificent Yellow-blotched Palm Pitvipers, Bothriechis aurifer. But before we see them we have an appointment with some very special birds. Birds that this private reserve was named after, the Resplendant Quetzal.

As the Quetzals light up the trees, the Unicolored Jays start to arrive for breakfast. The lodge owners put food out for them every morning and they come in waves to feed. They really are attractive birds.


One of my favourite hummingbirds joins the throng, a brilliantly coloured Violet Saberwing. They're large hummers too and almost constantly on the move. I was lucky to find one that kept pitching up close to the breakfast area.

At long last I get to see one of the most beautiful snakes I've ever had the pleasure of holding, a Yellow Botched Palm Pitviper, Bothriechis aurifer. My sincere thanks to Andres Novales for finding it.

Another small crew of scientists were on site climbing trees and studying the reptiles and amphibians of the reserve. I noticed one of the guys was disfigured and it turned out this was caused by a rattlesnake that bit him on the forearm when he was 18. After a week in a coma and several skin grafts later, this is how he was left. A stark reminder of just how dangerous some of these snakes can be - accidents do happen! 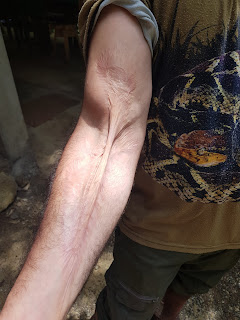 The Heloderma Reserve is situated in the Montagua Valley, southeastern Guatemala. It's a very special place with unique, seasonally dry forests that are home to an amazingly rare reptile - the Guatemalan Beaded Lizard, Heloderma horridum charlesbogerti, which was only discovered in 1984.   There are only about 200 of these large venomous lizards left in the wild and this is the place to see them.

'Heloderma' is a reference to the 'studded or beaded skin' of the lizard - more like armour that normal scales. Their venom is a potent Hemotoxin, which isn't used to kill prey but is used for defence. It has some nasty side effects in vertebrates as our host, biologist Daniel Ariano Snachez can testify. He's been bitten twice during the many years he's been studying them and experienced sever local pain and swelling lasting about 12 hours, dizziness and vomiting...lots of vomiting. He assures us that is the worst part of envenomation. Vomiting starts about 20 minutes after the bite and doesn't stop for about 3 hours with intense pain for 20-24 hours. He tells us "you really don't want to get bit".

Unlike snakes all Heloderma species (which includes the more well known Gila Monster) envenomate by chewing, which releases venom from glands on the lower jaw, which mixes with saliva and then enters the bite wound.

One of the bird highlights here was Russet-crowned Motmot (although I didn't manage to get any photos) but while we were waiting for them to appear I did get to film a phenomenon that I've always wanted to witness. Somewhere further up the valley it must have been raining...

We had more great reptiles too, including the highly venomous Central American Rattlesnake,Crotalus simus.

A bite from one of these guys is certainly debilitating and potentially fatal. They produce severe necrosis at and around the bite site which often leads to patients requiring a fasciotomy or even amputation. That said, they don't want to bite us.Venom is a precious commodity reserved for prey and only used on humans who attack or molest them...so don't mess with them!


Another difficult to see species due to their fossorial habits - Mexican Burrowing Python, Loxocemus bicolor. They have a beautiful rainbow-like iridescent sheen in good light.


Back at the reserve station we pick up a few birds including my first Brown-crested Flycatcher...


...and a smart Lesser Ground Cuckoo.

Our time at Heloderma Reserve was all too brief but with so much filming to cram into our 18 day shoot, it was time to leave again. Tomorrow we would be looking for Quetzals.
Posted by rharris at 20:59 No comments:

Yaxha (pronounced Yasha) is one of the most important archaeological sites in Central America. Dating back to AD 250-600, it was the third largest city in the region after Tikal and Mirador and even earlier evidence exists dating the settlement of the area back to 1000 BC! The ruins that we know today were discovered in 1904 and major work to stabilise the remains began as late as the 1980's. We were visiting at dawn to view the sunrise and film some of the animals found there.


It's a steep hike to the top of the largest pyramid with all the equipment and the 20 kilo lens rucksack is weighing very heavily on my shoulders. I'm glad to get to the top and admire the view and the sounds of the jungle.


After getting the required footage we head back to the lodge for a much needed breakfast before filming around the grounds.

Mike and I head off to follow a group of Howler monkeys for further footage. I'm tracking them with bins when I notice something run past me just a few feet away. It's a beautiful Grey Fox!  It suddenly notices me, stops and looks right at the camera before scooting off into the undergrowth. I saw it again in the open a few minutes later, they are very attracting little mammals.

As Mike and I have walkie talkies, we split up. Mike follows the Howler troupe and I head down to the shoreline to see if the croc has hauled himself out onto the bank to bask yet. Sadly there's no sign of the croc but an eye-catching Great Kiskadee  has settled close to the jetty on a rock and gives excellent close views.

Later in the day we went back to Yaxha to climb the pyramids at sunset. This was an awe inspiring experience and we had 25 Lesser Nighthawks catching insects around us, amazing!


Another great day and we hadn't finished yet. Although we had permission to film at Yaxha, the drone wasn't allowed to take off on site, so I launched it from El Sombrero Lodge 3 km away early the following morning instead. The clip below was from that flight - it was very surreal to be watching and filming the pyramids from 3 km away, great fun!

You can also check out Indigo Expedition's latest newsletter here.
Posted by rharris at 19:20 No comments:

Arriving after dark (once again), it's difficult to get a grasp of exactly where we are and what is around us. I do know we headed east after getting back to Flores. I know that we passed through the small villages of Macanche and El Zapota and that we've travelled 22 kms down another very bumpy dirt track to get here from the main highway, so I'm guessing we are a little off the beaten track. We meet the lodge owner, eat and head to our rooms, ready for an early start. We are now at El Sombrero eco-lodge.

The next morning I get my first proper view of the lodge and its surroundings and I'm not disappointed. Set on the shores of the Laguna Yaxha and surrounded by jungle, the lodge has an enviable position looking across the water to the distant Mayan ruins of Yaxha itself.


The setting is beautiful...really beautiful!

But before you think 'I'd be in there having a swim', think again.  There's a Morelet's Crocodile just under the surface of the water right by that jetty and it's a big one!

The crocs aren't the only thing down on the shore though. They share their habitat with a few other species too, including Central American Spider Monkeys.

And plenty of Neotropic Cormorants. Similar to our own Cormorants but they have a much finer, elegant head shape and bill.

We were scheduled to spend two full days here and it was going to be great. Tomorrow we were going to visit the ancient Mayan site of Yaxha and film the wildlife there.