A sudden (short-lived) burst of warm weather in the last week really helped bring on some of the local spring orchids, with this population of green-winged orchids starting to make for a fantastic display. Whilst there are still many more to flower, there are currently hundreds of spikes in perfect condition. 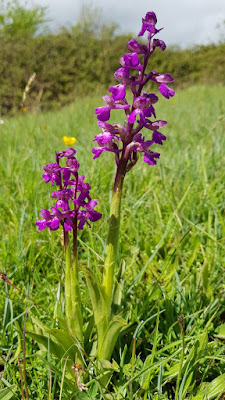 One of the warmer evenings also allowed for the first moth trap of the year in the garden at Whitestaunton resulting in a few nice moths for the year list.

With the weather now taking a cooler dip again it could be a while before the moth trap goes out. With luck there will be some good birds to to see soon.

With this in mind, I headed off early this morning to Wareham Forest with Dave Helliar, on what has become an annual pilgrimage to see and hear some of our our spring migrants, hopefully see a few reptiles and add to the butterfly year list too.

Shortly after we arrived, we both picked up on a 'pale lump' sitting on the short turf about 15 meters away. Raising our bins, we found it to be a Woodlark. It showed extremely well for a few minutes and was a great way to start the morning. I think these are the best views I've ever had!


This individual was soon followed by several other flyovers and eventually a singing bird - the epitome of Spring on the Dorset Heaths and definitely one of my favourite songs. Another classic heathland species is Dartford Warbler. We managed about 4 birds but this is fewer than other other years. We struggled last Spring too - perhaps 'The Beast from the East' took its toll on them last March?


There were good numbers of Stonechat and Meadow Pipit, at least two Cuckoo seen and heard and a ring-tail Hen Harrier was a highlight.

Another bird we always hope for (but don't always see) are Tree Pipits. Initially a little concerned that we hadn't heard any, our fears were soon dispelled as not one, but about half-a-dozen were heard and seen in quick succession close to one another.

Surprisingly only a handful of Slow Worm Anguis fragilis and Viviparous Lizard Zootoca vivipara were the only reptiles seen, despite temperatures climbing to a very respectable level by mid-morning.

We headed back to the car and switched locations where we soon found a pair of Sand Lizards Lacerta agilis, but that was our lot for the day and we didn't add any further to the day's reptile tally.

As for butterflies - much slower than expected but Peacock, Orange-tip, Speckled Wood and Brimstone made it onto the list....just. Good numbers of the day-flying Common Heath moth were also noted along with a single Green Tiger Beetle.

The journey home added a Green Sandpiper, which was hanging out on a flooded field towards Dorchester. Not a bad morning out by any standards but I'll have to go back, there's still some unfinished business on the reptile front.
Posted by rharris at 15:50 No comments:

Last weekend marked the start of the orchid season in the UK for my brother and myself  and the weather was perfect for our annual trip to the Dorset coast to look at the Early Spider Orchids.

These beautiful little orchids with their velvety brown 'spider' like flowers are nationally scarce and confined to short coastal turf along south-central to southeastern England.  They are among the very first orchids to flower and no orchid season would be complete without seeing them. 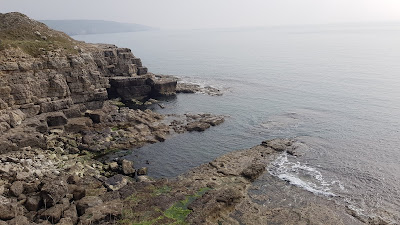 A search for reptiles in the warm conditions also proved fruitful with 4 adders seen, including 3 males.


The morning also yielded our first House Martin's, Swallows, Blackcaps and Willow Warblers of the Spring but the highlight was this flyover Red Kite.


Next, Early Purple and Green-winged orchids.