Known locally as the Barba Amarilla (yellow beard), Terciopelo or Fer-de-lance, Bothrops asper is a member of the lancehead family of pitvipers and is without doubt the most dangerous snake in Central and South America. It causes more human fatalities each year than any other species found in the region. Injecting an average 105 mg of venom with each bite, just 50 mg is considered a fatal dose for humans. The venom causes pain and swelling and has cytotoxic and hemotoxic qualities. If the bite doesn't kill it causes significant pain and tissue damage often resulting in the loss of limbs or severe disfigurement.

This snake is surprisingly common and is found throughout humid lowland forests up to approx 2000+ m from southern Mexico through Guatemala, Belize, Nicaragua, Honduras, Costa Rica, Panama to Colombia, Venezuela and western Ecuador in South America.

Being common certainly contributes to the number of encounters with people but it is also a highly irascible snake. It usually sits tight when disturbed and is often trodden on, it becomes easily aggravated and confrontational if interacted with. At Tapirus Lodge in Costa Rica, it was the most frequently encountered snake and we had several close encounters whilst walking to the restaurant in the evenings, including the juvenile above. The cameraman Mike Hutchinson, almost trod on this one in the dark between the restaurant and the accommodation.

Despite their terrifying reputation, bites can be mitigated if you are aware of their presence and take simple precautions - using a head torch/torch at night, wearing stout footwear and avoiding stepping blindly over logs and fallen trees across footpaths (their favourite ambush cover) will all help. Personally I can't wait to see these incredible reptiles again when travel allows.

For those in any doubt as to the seriousness of the effects of Terciopelo venom, the following image from Google clearly illustrate what happens to human flesh after a bite. 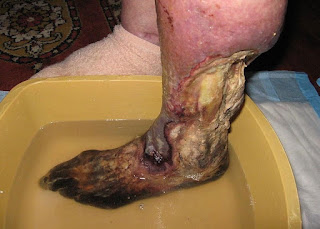